Okay we’re not Gawker but I couldn’t resist using the headline that Ian Shapira, a reporter for The Washington Post, suggested to them for a story he wrote about how outlets like Gawker are killing journalism.

Aptly titled, “The Death of Journalism (Gawker Edition),” Shapira writes about how he was at first elated when Gawker, “the snarky New York culture and media Web site,”  blogged about his story in that day’s Washington Post. However - after showing the coup to his editor who replied, “They stole your story. Where’s your outrage, man?” - he began to grow more and more “disenchanted with the journalism business.”

In an effort to not also steal and reprint Shapira’s story, I’ll just link to it for you to read in full. The reason I mention the story here is that, as PR professionals, it’s important for us to pay attention not only to what reporters are writing and working on, but what they are facing in their own industry. (Shapira’s lament on how long it took him to research and write the article, as compared to how long it took Gawker to write their synopsis of it - and what the income for such a Gawker reporter is - is particularly interesting.) 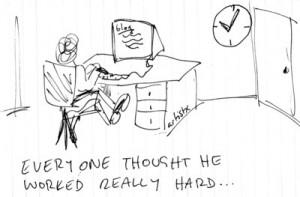 As our own industry has been under fire lately, so too has that of the media - one of the biggest and most important constituents to a PR professional’s job. We need to pay attention - the transparent nature of the Internet - particularly digital content and social media - is shifting the careers of both journalists and PR executives, and it will be interesting to see where we all end up.

In fact, another recent example of this shifting landscape came in the form of  YouTube’s “News Near You” - explained in this New York Times article today. “News Near You” allows news outlets that have signed up with YouTube to post news packages and split the revenue from the advertisements that appear with them.

If you’d like to further explore the topic of journalism’s shifting landscape (in particular, of course, “how Gawker is destroying journalism”), Ian Shapira will be online to chat with readers at 11 a.m. Tuesday. You are invited to submit your questions before or during the discussion.